Home » Uncategorized » Accompanying survivors of suicide on their healing journey 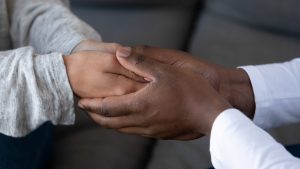 Many of us probably know someone who has been impacted by suicide.

According to the CDC, every individual who dies by suicide leaves behind an estimated six or more close family members, friends, and other loved ones.  In 2019, for example, more than 45,000 Americans died by suicide. That means at least 270,000 people lost someone they cared deeply about in that year alone.

Suicide affects the wider community, as well.  According to a study, for every U.S. suicide death, 135 people are exposed to that suicide. That can include co-workers, classmates, neighbors, and members of a person’s faith community.

“For people who lose someone to suicide, the healing process is a lifelong journey,” says Amy McNicholas, LCPC, mental health specialist and manager of Advocate Health Care Faith and Health Partnerships in Illinois. “What starts out as a roller coaster could come into a gentler ebb and flow. The loss never goes away, but it does soften over time.”

What can we do to walk alongside survivors of suicide and bring them to a place of healing and recovery?  According to McNicholas:

First and foremost:  listen. “Active listening means really paying attention to what someone is saying,” McNicholas says. “Be empathetic not sympathetic. Empathy fuels connection. You may not be able to relate to their experience, but you can connect with the feelings of sadness and grief.”

Be a continued and consistent presence.  “In the early moments, that person may get a lot of support, but in the weeks that follow, may not have as many people surrounding them with support,” McNicholas says. “Try to be a consistent presence and check in with them. Being a companioning and relational presence is such a gift.”

Know what – and what not – to say.  “It is important to understand everyone’s experience is unique and words  often fall short,” she says. “You can show your love and concern by simply saying, ‘I’m so sorry for your loss,’ or ‘I have no idea what you are going through, but I’m here,’” McNicholas says.

“Avoid talking about your experience or saying things like, ‘God gives you only what you can handle,’” McNicholas adds.  “Those things just don’t resonate in that moment and can be hard for people to hear, or they may not even hear it. Less is more for these situations.”

Learn. “Faith leaders could take the Question, Persuade, Refer (QPR) course and trainings through the American Foundation for Suicide to become more comfortable with suicide,” McNicholas says. “The more comfortable you are, the easier it will be for you to talk about suicide and take preventive measures within the congregation.”

“Even seasoned therapists can struggle with helping people who have experienced the loss of someone to suicide,” McNicholas added. “Making yourself as comfortable as possible and learning as much as you can about suicide can be really powerful.”

Build a circle of support and care.  “As spiritual leaders, clergy could be an impactful healing companion and a listening ear for someone who’s experienced a loss,” McNicholas said. “But with this kind of catastrophic, sudden loss, it is recommended that clergy link survivors to outside resources, such as individual therapy or group counseling to build a circle of support of care.”