Faith Health Transformation / ‘…something much needed for the community.’

Home » Uncategorized » ‘…something much needed for the community.’ 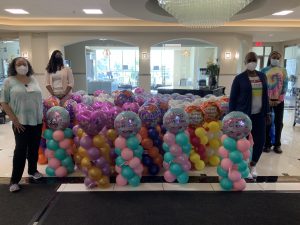 Staff from Windsor Estates Nursing & Rehabilitation receive balloons that were donated as part of the Mother’s Day Card Project.

Thanks to an outpouring of love and support from community members, 800 women at risk for isolation received a special card on Mother’s Day.

“We wanted to remind women from the community that they are loved and appreciated – that they are not forgotten,” said LaShondria Purnell, Faith Community Nurse with Advocate Aurora Health. “There were smiles and expressions of warmth when women opened their cards. It was something much needed for the community.”

Along with Advocate, Claretian Associates and the South Chicago Neighborhood Network sponsored the project.

A special thank you to the individuals and organizations that helped make this project a success, including:

Many thanks, also, to volunteers who purchased or created cards, including those from: