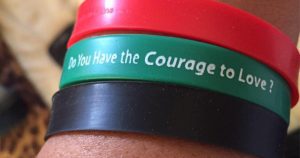 Around the world, one of the ways that health professionals measure the health of a community is by the health of babies—whether they are born too early (pre-term birth) and whether they die before their first birthday (infant mortality). In African American communities in Chicago and around the country, babies are significantly less healthy than their white counterparts. For example, in the Auburn Gresham community where the Courage to Love project is centered, the pre-term birth rate is 14.6 per 100,000 births compared to the Chicago average of 9.7. The infant mortality rate is 15.6 per 100,000 live births, the 5th highest rate out of Chicago’s 77 neighborhoods. This rate is is seven times higher than in Lakeview, an upscale Chicago neighborhood. Nationally, regardless of where they are born or their parent’s income or education, more African American babies are born early or die before their first birthday than any other babies.

This is unacceptable and preventable. African American babies are not dying at higher rates because there is something wrong with them or their mothers or fathers. There is not something about being black that makes this happen. What researchers know is that social stress has an enormous impact on our bodies and that African Americans carry a disproportionate stress load because of daily encounters with institutional racism and discrimination.

Numerous studies indicate that the chronic release of stress hormones over the course of a woman’s life and during pregnancy can make women more vulnerable to premature labor. (Braveman, 2011) David and Collins found that black women who felt discriminated against had two times the incidence of low birth weight babies. If they experienced discrimination in at least three areas of their lives, the increase was nearly threefold. (Collins, et al. 2004.) Michael Lu, a pioneer in Life Course Theory says, “Pregnant African American women have greater accrued risk for and fewer amassed protections against poor birth outcomes because of the multigenerational social inequities racism produces. Consonant with theories of weathering and allostatic load, their reproductive health may be compromised well before they ever become pregnant.” (Lu and Halfon. 2003.)

In 2005 the Health Policy Institute published a report entitled, The Courage to Love: Infant Mortality Commission Implications for Care, Research, and Public Policy to Reduce Infant Mortality Rates. The report explored the idea of “relationality” as a framework for understanding and responding to parent and infant well-being. Relationality, also known scientifically as social cohesion, social capital, or systems theory, and theologically as love, assumes that relationships are fundamental to our humanity, well-being and capacity to thrive. The Commission hypothesized that disparities in low birth weight and infant mortality have less to do with prenatal care and access to services, and more to do with the physical consequences of the stress that occurs when our social relationships are not healthy. (Joint Center for Political and Economic Studies, Health Policy Institute. 2007.)

The report called for interventions that “focus on the repair and support of interpersonal relationships at all levels:”

Courage to Love aims to build on the findings of this report, not to create more services and programs, but to support a movement rooted in the wisdom of the community about what is needed to create Loving Communities—protective, nurturing neighborhoods where mothers, fathers and babies can thrive.

The Work of Courage to Love

The Courage to Love project is exploring what this kind of love actually looks like “on the ground” and how we might be able to cultivate it and help it flourish in communities. We are currently engaged in in-depth conversations with members of the Auburn Gresham community about both the stressors that they experience in their daily lives, but also the ways that they encounter love, support, trust and connection. Through these conversations, natural ideas are emerging that families, congregations and organizations can begin to implement where they are. We are also probing for ideas about what changes need to happen at the structural level for Auburn Gresham to be an economically strong, safe, vibrant, caring, connected community in which families are nurtured and babies are born healthy. Our goal is to create a framework to operationalize and apply these ideas at the community scale.